From stem cell research to global warming, human cloning, evolution, and beyond, political debates about science have raged in recent years — and, to the chagrin of most observers, have increasingly fallen into the familiar categories of America’s culture wars. In Imagining the Future: Science and American Democracy, Yuval Levin explores the complicated meanings of science and technology in American politics and contends that the science debates have a lot to teach us about our political life. These debates, Levin argues, reveal some serious challenges to American self-government, and put on stark display the deepest strengths and greatest weaknesses of both the left and the right.

Levin takes up some key dilemmas of the science debates: Why is it that these arguments seem to divide along the same camps of left and right as so many other issues in our politics? Should science be above politics, or should it be answerable to our democratic institutions? Are the subjects it takes up too technically complicated and too urgent and important to be left to laymen politicians and citizens? Is science morally neutral, or is it a moral endeavor with moral promise and peril? Are American conservatives in fact engaged in a concerted assault on the influence of science? Is the American left justified in calling itself the party of science? What do arguments about embryos, climate, or the origins of man teach us about contemporary America?

Most of the science debates, he concludes, are not about particular innovations, technologies, theories, or facts. Rather, they come down to a profound dispute between liberals and conservatives about the right way to think about the future. Science is only one subject of this broader dispute, but it is one that makes the nature of the divide at the heart of our politics unusually clear. Properly understood — which they have not been lately — those debates may illuminate the contours of our politics and the deepest meaning of scientific progress.

Yuval Levin is a fellow at the Ethics and Public Policy Center, director of the Center’s Bioethics and American Democracy Program. He is a senior editor of The New Atlantis and is the editor of National Affairs. He has served as Associate Director of the White House Domestic Policy Council and Executive Director of the President’s Council on Bioethics. His essays and articles have appeared in numerous publications including the New York Times, the Wall Street Journal, Commentary, the Weekly Standard, and others. 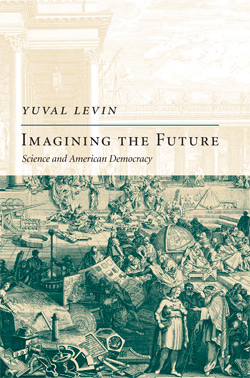 Praise for Imagining the Future

“Levin succeeds in showing how the innovational image of the future, left unmoderated, will dash the hopes of Americans left and right. But he is unafraid to conclude that taming our innovations to serve our future generations will require a more robust articulation of the human dignity that gives them pride of place in our vision of the future. ”