Chariots in the Sky

Until men walked upon it in 1969, the Moon had always marked the first of those celestial limits earth-bound humans could not transgress, limits separating what man for eons had regarded as the sacred realm of the gods and even modern man could only gaze at in wonder. With the lunar landing, however, human beings for the first time set foot on heavenly soil and, planting a flag, claimed it for mankind. 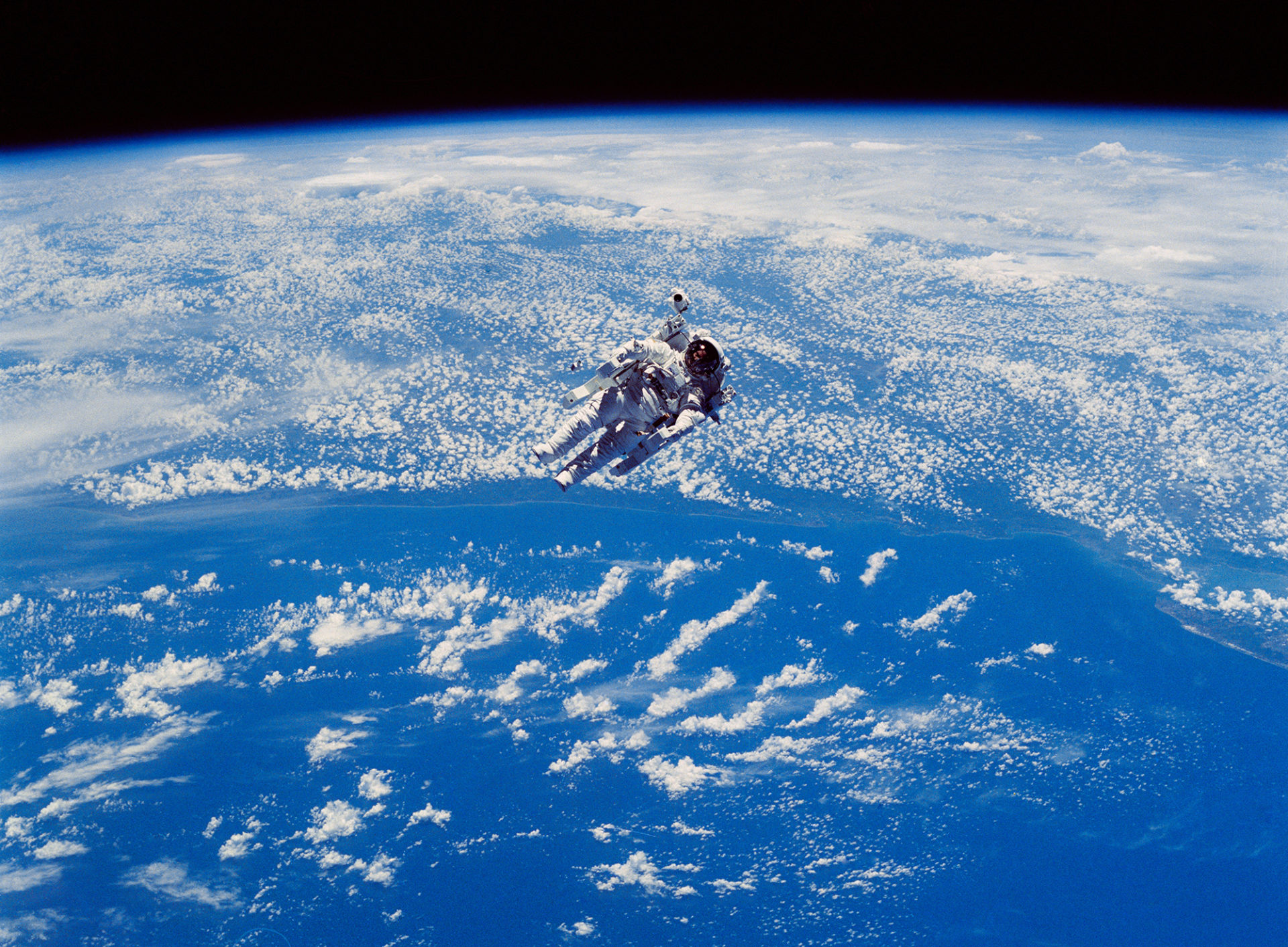 A Half-Century in Space

Nine years earlier, spurred on by advances in Soviet rocketry, the Eisenhower administration had already speculated on the possibility of sending American astronauts to the Moon. Under the leadership of Abe Silverstein, director of NASA’s Office of Space Flight Programs, the mission was dubbed the “Apollo program,” named for the ancient Greek god of the sun because, in Silverstein’s words, “the image of the god Apollo riding his chariot across the sun gave the best representation of the grand scale of the proposed program.”

With the election of John F. Kennedy, the Apollo program was given decisive impetus. In a 1961 message to Congress, President Kennedy announced the national goal of putting a man on the Moon before the decade was out — “the most hazardous and dangerous and greatest adventure on which man has ever embarked.” Under his inspiring leadership, space would become “the edge of a New Frontier,” supplanting the terrestrial frontier of our nation’s westward expansion. Unlike that earlier frontier, the new frontier of space would point to a horizon infinite in extent.

The choice of Apollo’s name for the program was tinged with irony. Apollo’s most famous temple in Greece was located at Delphi. There for countless generations Apollo’s priestesses had prophesied the future by drawing upon the god’s oracular powers. Carved in marble above the temple’s entranceway were words of wisdom intended as cautions to the faithful. Most prominent among them were “Nothing in excess” and “Know thyself.”

The first of these two admonitions warned visitors about the danger of going to extremes. A life of moderation is best, the ancient sages taught, because it avoids the harmful consequences of excess. The second warning, for its part, cautioned people to be mindful of their human limitations, lest they be destroyed by overreaching. Taken together, the two admonitions constituted a prescription for averting tragedy, both personal and national.

According to mythology, such personal tragedy was visited upon Apollo’s own son, Phaethon. Phaethon’s mother had repeatedly told him he had been fathered by none other than the god Apollo, but the lad harbored doubts. So Phaethon traveled eastward to the horizon where, at dawn, Apollo yoked the team of horses that drew his solar chariot across the sky. “If indeed you are my father,” Phaethon said, “then grant me any wish.” “Of course, my son,” Apollo gladly replied. “Then I choose to drive your chariot across the sky,” the young man proclaimed. Knowing the danger of entrusting the reins of his fiery team to young and inexperienced hands, the horrified god begged his son to reconsider. But the promise had been made, and Phaethon, refusing to relent, mounted the golden chariot.

At first the team bolted from its chute as always, climbing upwards to the heavens on its customary track. But sensing the loose hold their inexperienced driver had upon the reins, the horses broke free, diving toward the surface of the earth with the blazing sun in their train. Observing this from the heights of Mount Olympus, Zeus, king of the gods, took action. To save the earth from incineration, he hurled his thunderbolt at the runaway chariot, striking Phaethon and sending him plunging to his death.

Phaethon’s youthful enthusiasm had blinded him to his inexperience. Failing to acknowledge his limitations tragically cost him his life.

Tragedy was something with which the Greeks were intimately familiar, for, like Phaethon, they were an emotionally-charged people driven by a passion to achieve and often paid a high price for their ambitions. Lovers of freedom, they frequently failed to anticipate the destructive consequences of their impulsive choices. The true causes of tragedy, their storytellers repeatedly reminded them, lie not outside ourselves but within. We are most vulnerable, they taught, not when we are weak but when we are strong, for when we are strong, we can become drunk with power and commit acts of hubris that are irreversible.

Sophocles dramatized this propensity in his tragedy Antigone. In an ode that celebrated humanity’s astounding creative powers, he simultaneously pointed to man’s penchant for destruction:

Many are the world’s wonders, but none more wondrous than man.
Under the south wind’s gale, he traverses the gray sea,
knifing through its surging swells.
Earth, eldest of the gods, imperishable and everlasting,
he erodes year after year with winding furrows
cut by his equine team.
The winged flocks of birds,
the wild herds of beasts,
and the salt-sea schools of fish
he entraps in the woven mesh of his devious net.
With his devices he overpowers the creatures of the wild,
reining in the shaggy-maned stallion
and yoking the stubborn mountain bull.
Speech he developed and wind-swift thought
and the talent to dwell together, and learned
how to evade the chilling frost and pelting rain.
Ingenious, there is nothing that comes that he cannot master;
only from Death can he not contrive an escape.
With a brilliance and subtlety beyond imagining
he gravitates at times toward evil, at other times toward good.

Hannah Arendt understood that, while technology might apply scientific discoveries to human use, science per se was unconstrained by any consideration for the good of mankind because the concerns of the scientist, including those of the space scientist, are different from those of the humanist. The concerns of the former are physical and objective; of the latter, spiritual and subjective. Scientists express their findings through abstract mathematics; humanists, through words and images based on sensory and emotional experience. And most importantly, while the humanities are preoccupied with moral and ethical considerations, science and technology in their purest form know no such limits.

Viewed in this light, the landing on the moon is symbolic of a profound change in human history, the dissolution of historic limitations, a tendency intrinsic to the two forces, science and technology, that have gone on to become the dominant forces governing Western civilization in these days of the waning influence of traditional ethics and morality. Indeed, so great is their power and so awesome their destructive potential that they can rightly be compared to the fiery chariot of Apollo.

Yet, as we have seen, that chariot was only as good as the hands that held its reins. President Kennedy made much the same point when he described the moral challenge space exploration would present. “Space science,” he said in his Rice University address in 1962, “like nuclear science and all technology, has no conscience of its own. Whether it will become a force for good or ill depends on man” (emphasis added). By sating our voracious curiosity and multiplying the primal force of our will, science and technology together — like Apollo’s spirited team — tempt us to fulfill our grandest ambitions by acting on our impulses, however blind we may be to the long-term consequences of their exercise.

The dramatic effects of these two forces can be seen by examining the ways in which they have transformed our perceptions of time and space.

The Industrial Revolution quickened the pace of everyday life; the Electronic Revolution has accelerated it even further. Unlike the slower mechanical devices of yesteryear, the newer electronic technologies that we now depend upon for our existence operate at nearly the speed of light, infusing our lives with artificial urgency and unremitting stress. To our detriment we have, in Thoreau’s words, become “the tools of our tools.” While delivering overwhelming quantities of data, electronic communications demand that we respond rapidly with quick decisions, but simultaneously deny us the precious time we need for thoughtful reflection. Meanwhile, a global entertainment industry cultivates our impulses by instantly gratifying our desires while tempting us to desire even more. Dazzled by rapid-fire stimuli and captivated by glittering trivia, we lose sight of the critical facts and enduring truths they obscure.

Those stimuli and trivia are generated by commercial interests profiting from our distraction by feeding our appetites in limitless ways. By making the acquisition and possession of material goods and the enjoyment of sensory pleasure the center of our existence, materialism continues to alter the landscape of our lives. More and more, matter is displacing spirit. And while nature might otherwise constitute by its rhythms and autonomous existence a reminder that there is something more to life than what we can manufacture or buy, nature itself is being increasingly destroyed and displaced by a synthetic man-made environment. Like the demolition of historic buildings, the speed of nature’s transformation serves to erase the very memory of an earlier time, even as the speed of social change distances us from the intellectual principles and spiritual values that once sustained us.

Some optimists see in the future a grand convergence of new scientific discoveries and technologies that will open the unlimited vistas of a Golden Age. Others more pessimistically fear that such a convergence may instead cause humanity to lose control and irrevocably cede its destiny to the machines, an event philosopher Jacques Ellul forecast over a half century ago in The Technological Society. These extreme visions reveal a shared truth: The future of mankind will ultimately depend upon what we do here on Earth, not what we do in outer space. Our stature as a race will only minimally be increased or diminished by the “greatest adventure” President Kennedy described long ago. In the end, it will mainly be determined not by whether we ride chariots into the heavens but whether we have the courage to know ourselves.

Link copied to clipboard!
Subscriber Only
Sign in or Subscribe Now for access to PDF downloads
Stephen Bertman is Professor Emeritus of Classics at Canada’s University of Windsor and the author, most recently, of The Eight Pillars of Greek Wisdom. The above translation is the author’s own.
Stephen Bertman, “Chariots in the Sky,” The New Atlantis, Number 18, Fall 2007, pp. 71-75.

Chariots in the Sky