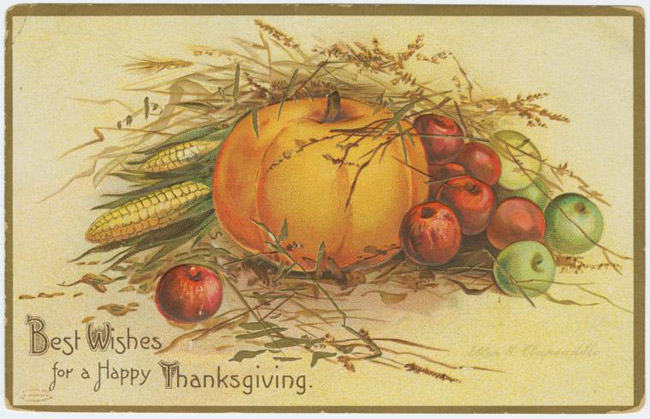 This article was first published by Culture11 in November 2008. Reprinted with permission.

Thanksgiving is a holiday almost entirely devoted in spirit to the virtue of gratitude and it is the most distinctively American of all our holiday traditions. Whether or not Thanksgiving is ultimately of Protestant or Catholic origins, it is certainly the case that it has become not only an annual occasion for frenetic shopping, but also a peculiar expression of the unique American consciousness. Americans take seriously giving thanks, and, given the typically modern demotion of gratitude to second class status among the virtues, our yearly homage to it seems to be evidence of our resistance to a wholesale acceptance of modern principles.

It’s commonly understood that John Locke is the philosophical founder of America. Maybe more than any other thinker, he is responsible for our understanding of natural rights and political liberty and the kind of constitutional republicanism that proves most protective of both. Nevertheless, Locke’s most radical — and maybe most central — philosophical innovation is a particular conception of nature as nothing more than fodder for our manipulation by rational labor. Contrary to the Aristotelian and Thomistic principles regnant during his time, he rejected the possibility that an understanding of nature provided any serviceable moral guidance, illuminated the heights and depths of our capabilities and limitations, or, through its bountifulness and beauty, provided evidence of God’s beneficence and providence. Modernity turns out to be such inhospitable ground for the cultivation of virtue precisely because Locke’s view of nature as characterized by scarcity so decisively won the day; if anything, the utter impoverishment of our original condition justifies great resentment over the state of lonely solicitude it engendered. Instead of a thanks-giving holiday we should start a self-honoring one in the Lockean spirit of self-celebration — if, that is, we’ve achieved the comfortable self-preservation that we instinctively desire. We would have ourselves to thank rather than penurious nature.

In fact, the Lockean position on nature — that it furnishes only worthless materials that gain value through our industriousness and ingenuity — could not be more inconsistent with gratitude; Locke specifically undermines any conception of nature that would inspire profound indebtedness for what goods it might provide. Instead of gratitude for nature, Locke encourages pride in our mastery and possession of it. We are to take pride in ourselves as the only part of nature that can refashion nature.

It’s hard for beings who fancy themselves as radically self-sufficient or autonomous to be grateful for anything. The real problem for gratitude might not even be Locke’s radical denigration of nature as much as his view of the kind of individuals we must be to properly and collectively exploit it. Locke’s interpretation of the human person is remarkably abstract and generally unencumbered by any real dependence on others. The Lockean individual freely consents to consort with other individuals out of a calculation of interest, but not out of need. In place of a natural gregariousness and mutual dependence, Locke substitutes self-interested reason and atomistic independence; marriage, for example, is reduced to a voluntary compact between consenting adults who have overlapping interests. The individual who freely chooses without the stewardship of nature or a recognized dependence on others interprets gratitude as a false show of modesty or a self-opaque expression of weakness.

However, there’s a preponderance of evidence that Americans don’t really live as if they really are completely autonomous. In fact, we are generally more likely to marry, to raise multiple children, to become an active member of a Church congregation, and to volunteer our time, money, and blood than just about any other collection of people on earth. Tocqueville famously observed that Americans consistently underestimate themselves, chalking up all their motivations to calculable interest and material gain rather than love, justice, or charity. We reflexively cling to the idea that the distance between our needs as individuals and the common good has been decisively bridged by “self-interest rightly understood,” or the idea that the enlightened, rational pursuit of our interests will make obsolete the need for old-fashioned notions like duty or sacrifice. Americans actually take pride in their apparent conquest of the spirited and erotic parts of the soul by the relentless pursuit of the more banal, earthly desires.

The language of individual autonomy has seeped its way into the very warp and woof or our popular consciousness. We often speak approvingly of the “self-made” man, read and recommend “self-help” books, and brag about how little self-conscious we are, which is shorthand for being self-sufficiently indifferent to the opinions of others. There is an entire market devoted to the “do-it-yourself” kit or manual that liberates you from dependence upon various experts and tradesman, and a proliferation of buffet restaurants and self-service gas stations that free us from the tyranny of waiters and attendants. Tipping, or the dispensing of a gratuity, is a traditional way to show gratitude for services well rendered, but we’ve newly discovered ways to avoid that suggestive recognition of dependence upon another.

Gratitude and a recognition of our ineluctable dependence as human beings seem to always go hand in hand with one another — to humbly acknowledge one’s dependence upon others, nature, or God is to recognize an opportunity for reasonable gratitude. Tocqueville’s famous observation about our insistent habit of explaining all our pursuits in the language of narrow interest is another way of noticing that we proudly boast we have overcome the need to show gratitude — that we’re indebted only to ourselves. This is partially what it means to be a being “endowed with certain inalienable rights” — that the most basic or primordial recognition of my status as a moral being revolves around my sense of my “self” and the protections against others I am entitled to versus the obligations I owe to others. To assert a right is, in essence, to make a demand, and no matter how justifiable that demand might be, it’s unlikely to be followed by a burning sense of gratitude. We demand that which is owed to us as a matter of justice, and so no thanks is in order when we finally receive it.

Given the many ways in which the undergirding premises of the American founding (at least in its Lockean strain) are anathema to gratitude, there is something conspicuously countercultural about our affection for Thanksgiving. A day entirely based upon a rededication to the virtue of gratitude amounts to releasing the whole human person from the cavern of abstract individuality. We acknowledge openly, if only for a day, the many debts we owe to family, friends, and God. Thanksgiving is a day for admitting that Tocqueville is right that we really do take seriously love and sacrifice — that we are more than beings with reason and interest, and that our dependence upon others is not merely a necessary burden to hide beneath rhetorical bluster but also a blessing to embrace.

For at least one day a year, Americans have an official opportunity for reflecting on the Thomistic or Christian component of the American founding overshadowed the rest of the year by its Lockean counterpart. Our Declaration of Independence might begin with atomistic and asocial individuals bound by deliberate contract, but it ends with a prayer to the “Supreme Judge of the World” for the “protection of divine Providence” by men who solemnly pledged to each other “our lives, our fortunes, and our sacred honor.” Christian humility and gratitude are not abrogations of human pride — we can be reasonably proud that we are the only creatures created in the image of God and that we are the height of His creation. However, this pride is always tempered by the recognition that we are not fully self-sufficient beings, that the creaturely nature we have pride in is something in itself to be grateful for, and that we are as much defined as human beings by dependence as we are by independence. The Christian account of the soul is always a combination of self-assertion and self-restraint, and this is evidenced by the necessary dialectic in St. Thomas between humility and pride, even for the great-souled or magnanimous man.

While it certainly has some advantages — especially for the promotion of limited government and the safeguarding of individual rights! — our deformed interpretation of individuality must necessarily have a pernicious impact on the political and social ties that bind us. Besides being closer to the truth than the Lockean account regarding human nature, the Christian psychology that is part of our political inheritance more accurately captures the nature of political liberty. Following Aristotle, we cultivate our natures as political animals through the dual exercise of ruling and being ruled, by reconciling our individual love for independence with the reality of mutual dependence. Thanksgiving is a fantastic time not just to reflect upon gratitude and the peculiar obstacles modernity poses to it but also the true meaning of political liberty within democratic life.

One could argue that one day a year is not much, but it’s important enough to constitute one of our most joyous and eagerly anticipated celebrations of the year. In many ways, a day devoted to the giving of thanks for a people anxiously preoccupied with the illusion of their autonomy must be a welcome occasion for rest. It behooves us to take advantage of this respite — not just from our manic productivity, but also from the pretense that we’re merely producers — and to enjoy the profound happiness that paradoxically comes from taking a break from its ceaseless pursuit. Thanksgiving is our day to recognize one fundamental way in which we are only ambiguously modern, and for this, we can rightly give thanks.

Link copied to clipboard!
Ivan Kenneally is an assistant professor of Political Science at the Rochester Institute of Technology in Rochester, NY and a contributing editor at Perspectives on Political Science. He is writing a book on the dangers technocratic elitism poses to American democracy.
Ivan Kenneally, “Thanksgiving,” Culture11, November 2008.
New York Public Library