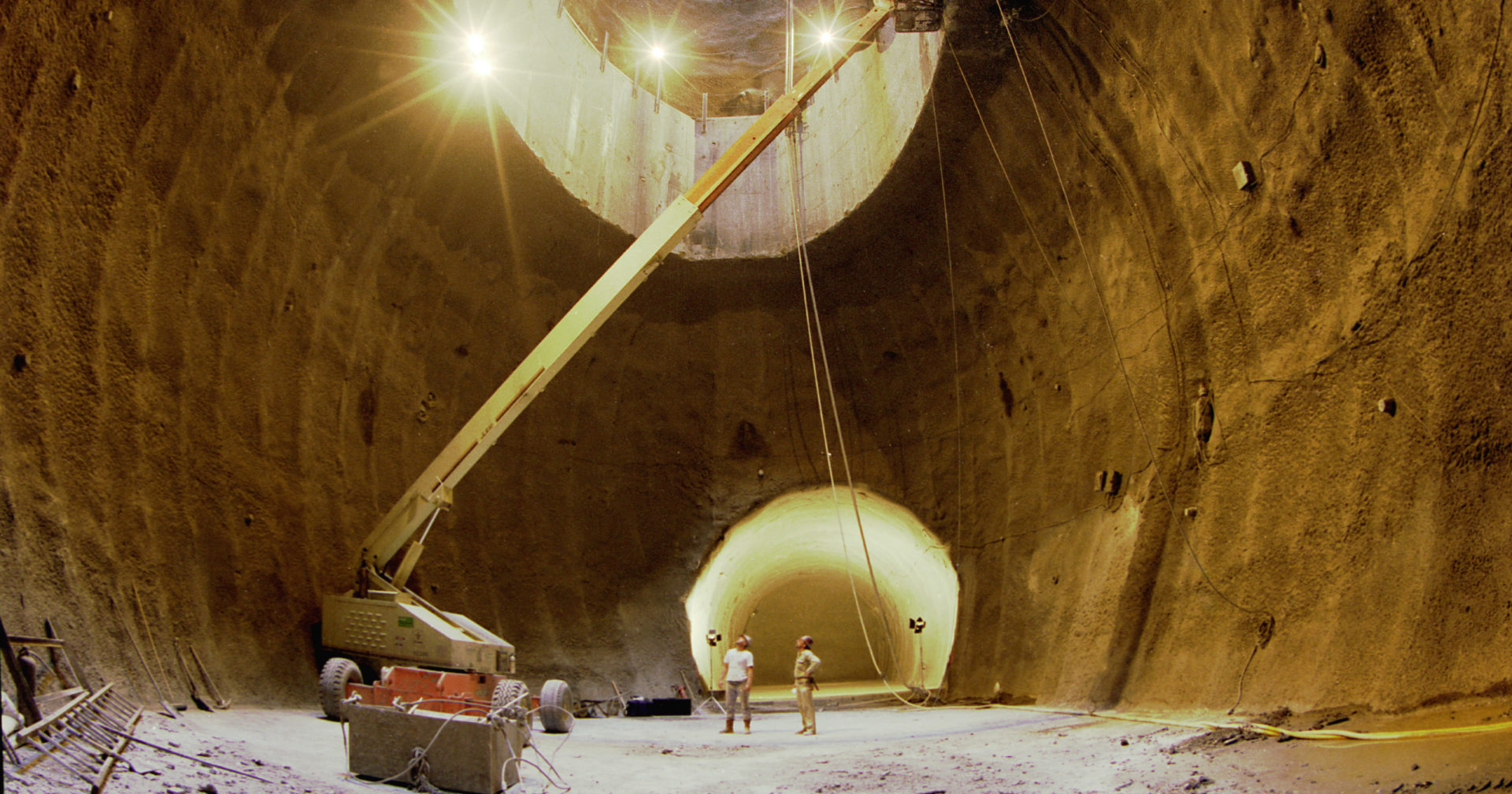 The Demon of Bureaucratic Chaos

I’m sure the tour will make everything clear.

Like many federal departments, the Department of Energy is a mutant. It was stapled together by Congress in 1977 and given the mission of securing America’s energy future. In typical federal fashion, the Department of the Interior retained control over coal, oil, and gas production on federal land and water, which left the DOE with a lot of money for nuclear warheads and a bit for technology. Recently described by former Secretary of Energy Ernest Moniz as “the department of weapons and windmills, quarks and quagmires,” the DOE also happens to be one of America’s top science agencies. Its R&D funding ranks third in size after the Department of Defense and the Department of Health and Human Services. Its world-renowned system of national laboratories — from the storied Los Alamos to the humble Jefferson Lab — enjoys bipartisan support and reliable funding, much like the DOE itself.

Consider, for instance, the budgetary process in fiscal year 2019. President Trump requested $30.6 billion in total for the DOE, a $4 billion cut from the previous year. But rather than approving the cut, Congress appropriated $1 billion more than the previous year. The president wanted the energy efficiency and renewable energy programs cut to about $700 million, and Congress responded by funding them too at a higher-than-before level, $2.4 billion. The administration’s budget hawks suggested eliminating the advanced energy research projects agency altogether, only to be promptly ignored by legislators. The total budget for the department now reaches just under $40 billion.

Numbers may belabor the point, but it is a crucial point to make: The Department of Energy is very popular among the people’s elected representatives. So, what’s the problem?

The department’s defining feature is its landscape. Dozens of hills speckle the foreground, representing the program offices concerned with energy sources of all types — nuclear, fossil, green — alongside electricity, statistics, and science. Behind them surges a sheer cliff face: Mount Radioactive Waste, hard to miss and impossible to reach. Looming further in the distance, the towering Nuclear Security Mountains cast their shadow over all.

These mountains in the background are the easiest entry point for the demon known as Bureaucratic Chaos. No badge required. Unlike Laplace’s “intelligence” (a being that knows the fate of all) and in contrast to Maxwell’s “finite being” (who breaks law and order), this gremlin occupies the tight space between commandment and execution. At a granular level, it shares the unpredictability of a chaotic system — the weather, for instance, or an island ruled by dinosaurs — but in the big picture fatal determinism reigns. Simply put, the demon stops good things from happening whenever and however it can.

Returning to the foreground, we find that the hills have hills. The landscape is fractal. Nothing earth-shattering, just little mounds dedicated to artificial intelligence and robotics, exascale and quantum computing, genomics and microbes, atmosphere and watersheds, space exploration and agriculture, and the origin of the universe.

Indeed, the equivalence of mass and energy, divined from the ether by Einstein’s photoelectric whispers, is the DOE’s foundational principle. Because energy equals mass multiplied by the square of the cosmic speed limit, scientists can determine which elements will yield energy through fusion and fission. We know which ones to glue together and which ones to crack apart — and so fusion power, nuclear reactors, and nuclear weapons are all logically housed under the same umbrella.

But if mass and energy are equivalent —“every single object made of matter bears a fundamental energy which just comes from it existing,” as French physicist Christophe Galfard describes it — then all things are mass and all things are energy. Sensibly prioritizing under such an infinite mandate is virtually impossible. Bureaucratic Chaos thrives in the resultant ungoverned spaces, where grant funding and workshops zip around like electrons liberated in plasma.

Things go to hell together.

It is probably best not to dwell on things like the putative heat death of the universe and the Sun’s absorption of the Earth. We don’t need to visit such extreme thermodynamics to reaffirm that disorder increases with time. “Life is a controlled unwinding of energy,” intones Oxford chemist Peter Atkins. If so, Bureaucratic Chaos is the great unwinder. The DOE is as much the Department of Entropy as it is the Department of Everything and Anything.

The scale of such disorder is difficult to appreciate in the abstract. As everyone knows, the government is inefficient. This lampooned characteristic is occasionally excusable, certainly perennial, and beside the point. There is something far deeper at work. To observe it, we will need to take a little tour.

We begin in the south-central desert of Washington State. Tucked away near the Columbia River and the western branch of the Laser Interferometer Gravitational-Wave Observatory (LIGO), the Hanford Site patiently awaits cleanup of its 56 million gallons of radioactive waste. The DOE’s Waste Treatment and Immobilization Plant now under construction will have the capabilities essential for safe disposal. Construction began in 2002 and was originally due for completion in 2007, but now only part of the project is scheduled to be operational by 2023, while the rest may not be operational until 2036. Over the course of two decades of work, construction costs have ballooned as well, from the contractor’s original bid of $4.3 billion to more recent estimates of up to $40 billion to eventually finish the plant.

Consider next the DOE project to convert plutonium stocks left over from the Cold War into civilian nuclear fuel. In 1997, the DOE had planned for a facility in South Carolina to carry out this work, to be finished by 2004 at a cost of $1.4 billion. By 2016, the date for completion was pushed back to 2048, with a price tag of $17.2 billion, and the overall costs of disposing of surplus plutonium under the program were put as high as $56 billion. So the idea of converting plutonium was scrapped in favor of sinking it in a waste facility in New Mexico. This new plan is projected to cost up to $19.9 billion over three decades, but does anybody believe these numbers?

One could argue that neither waste disposal nor fuel fabrication are innovative displays of scientific and technological prowess. Perhaps not, though the point is arguable. At a minimum, success in these relatively straightforward areas would display a kind of bread-and-butter technical sophistication that appears sorely lacking.

Expanding our scope, we observe the administrative corpses strewn across fusion energy sciences. In 1986, Lawrence Livermore National Laboratory completed construction of the Mirror Fusion Test Facility at a cost of $372 million, but it was never turned on. The DOE and the state of Texas poured $2 billion into constructing the Superconducting Super Collider — designed to be more than twice as powerful as Switzerland’s Large Hadron Collider, which discovered the Higgs boson — before its termination in 1993. The list goes on: Princeton Plasma Physics Laboratory’s National Compact Stellarator Experiment, canceled in 2008, or Livermore’s National Ignition Facility, completed more than $1 billion over budget and about 7 years behind schedule. American involvement in the France-based ITER project is a particularly perplexing saga. The United States co-founded it in 1985, withdrew in 1998 over fiscal concerns, and rejoined in 2003— only to threaten withdrawal again in 2014 and 2017. It then increased its share of funding.

Time dilation may offer some slender explanation for the relative delays, but that is too cute by half. Bureaucratic Chaos is at play, not at work. To be thoroughly incapable of handling legacy waste, to expend billions of dollars on projects that will never be completed, and to vacillate at the edges of scientific frontiers are symptoms of something more corrosive than procrastination and profligacy. The sense of futility is pathological. Entropy, not inefficiency, drives the plot.

Too much change is as destructive as too little.

The Department of Energy is full of intelligent and dedicated professionals. Delays and overruns are endemic across both public and private sectors. In fact, when given clear instructions and necessary resources, the bureaucracy will execute projects at the highest level.

Illustrative examples are few, but weighty. Whatever the merits of the Obama administration’s nuclear deal with Iran, it was the physicist Secretary of Energy Ernest Moniz, not Secretary of State John Kerry, who made its terms palatable to Capitol Hill. Politicians placed their meager trust in technicians, not in other politicians. More tangibly, consider the sterling reputation of the Naval Reactors Program, which quietly provides nuclear propulsion to the U.S. Navy, both under the sea and floating atop it. This DOE sub-office (no pun intended) is aided by its explicit lines of authority, accountable leadership, and an essential mission. The Energy Information Administration, a statistical agency also technically part of the mothership, is among the finest in the world. Its routine data releases rival in market-moving importance those of the Bureau of Labor Statistics and the Treasury Department. With clear direction from the voting public to compete with the Soviet Union and reduce energy-import dependence, the DOE further played prominent roles in the rise of advanced computing and unconventional oil and gas drilling techniques.

A slash-and-burn reorganization is not the answer, nor would it suffice. The primary blame rests with Bureaucratic Chaos. This highly disruptive demon mercilessly punishes the slightest mistake. It induces a culture of hesitation that reigns supreme from program to program. It keeps projects on life support because nobody has the will to finish them or the courage to cancel them. It modifies blueprints while construction is underway, eliminating expected capabilities while cutting costs and raising the political price. All of this foolishness sends signals — and not of intelligent life.

Overcoming disorder is, by definition, the hard path. As the debate rages between populists and technocrats, note that the DOE — one of the largest technical agencies in the world — is emblematic of entropy precisely because the voting public declines to instruct it. (The few exceptions prove the rule.) Only elected leadership can exert the necessary force to alter the velocity of an object as massive as the federal government. The very first step must be to govern the ungoverned spaces, to root out the mysterious creature that blocks good things from happening.

Link copied to clipboard!
Subscriber Only
Sign in or Subscribe Now for access to PDF downloads
Tristan Abbey is a writer in Alexandria, Virginia. He served as a senior policy advisor at the U.S. Senate Committee on Energy and Natural Resources from 2019 to 2020 and as director for strategic planning at the National Security Council from 2017 to 2019.
Tristan Abbey, “The Demon of Bureaucratic Chaos,” The New Atlantis, Number 65, Summer 2021, pp. 15–21.
Header image via U.S. Department of Energy

The Demon of Bureaucratic Chaos