Human Extinction and the Meaning of Progress

Tomorrow has never looked better. Breakthroughs in fields like genetic engineering and nanotechnology promise to give us unprecedented power to redesign our bodies and our world. Futurists and activists tell us that we are drawing ever closer to a day when we will be as smart as computers, will be able to link our minds telepathically, and will live for centuries — or maybe forever. The perfection of a “posthuman” future awaits us.

Or so the story goes. In reality, the rush toward a posthuman destiny amounts to an ideology of human extinction, an ideology that sees little of value in humanity except the raw material for producing whatever might come next.

In Eclipse of Man, Charles T. Rubin examines intellectual precursors to the movement to perfect and replace the human race. He shows how today’s advocates of radical enhancement are — like their forebears — deeply dissatisfied with given human nature and fixated on grand visions of a future shaped by what they would call technological progress.

Moreover, Rubin argues that this myopic vision of progressivism stands in stark contrast to the more nuanced pictures of the human future that can be found among thoughtful writers of fiction. By exploring and criticizing the dreams of posthumanity, Rubin defends a more modest vision of the future, one that takes seriously both the limitations and the inherent dignity of our given nature. 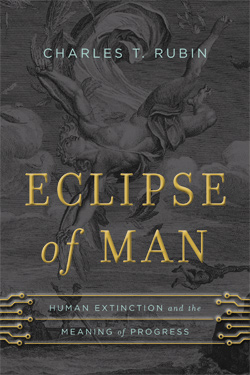 Praise for Eclipse of Man

“Nano-utopia — the redesign of the body — the biochemistry of bliss — the immortality of an uploaded mind — the coming Singularity. It’s tempting to dismiss transhumanism as wacky. Charles T. Rubin shows why we should take seriously this most radical aspiration to go beyond man. Rubin uncovers the surprising and complex genealogy by which the quest for human betterment became a nihilistic embrace of human extinction. Drawing on works of the imagination from classical mythology to science fiction, from painting to movies to literature, Rubin sketches a philosophically deep response to the might-makes-right premise of transhumanism. He offers a more charitable view of abiding human imperfection — a view that welcomes change while affirming the continuity of the human condition. With clarity and beauty, Rubin defends the good of being human. ”

“More than a decade ago, Charles T. Rubin pointed out that the utopian dreams of perfecting humanity amounted to nothing less than an ‘extinctionist project.’ In this new book he explores some of the confusions and contradictions inherent to transhumanism, thereby helping us to understand and appreciate better what it means to be human. ”

“Eclipse of Man is a hugely significant accomplishment. While pundits are immersed in worries about political progressivism, the real energy is with techno-progressivism. Charles T. Rubin really knows the technological premises, the psychology of perennial human longings, and the various fictional accounts of the predicament of particular lives techno-transformed that illuminate the utopian project of our time. The transhumanist future, Rubin meticulously explains, is neither as inevitable nor as reasonable as some believe, and he aims to give us the intellectual and moral resources to choose against or at least mitigate its anti-relational and depersonalizing excesses. ”