There was a fascinating article on CNN last week about an experimental medical technique: 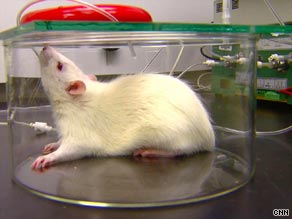 She turns a dial, and the sealed enclosure starts to fill with poison gas — hydrogen sulfide. An ounce could kill dozens of people.
The rat sniffs the air a few times, and within a minute, his naturally twitchy movements are almost still. On a monitor that shows his rate of breathing, the lines look like a steep mountain slope, going down.
At first glance, that looks bad. We need oxygen to live. If you don’t get it for several minutes — for example, if you suffer cardiac arrest or a bad gunshot wound — you die. But something else is going on inside this rat. He isn’t dead, isn’t dying. The reason why, some people think, is the future of emergency medicine.
You see, Roth thinks he’s figured out the puzzle. “While it’s true we need oxygen to live, it’s also a toxin,” he explains. Scientists are starting to understand that death isn’t caused by oxygen deprivation itself, but by a chain of damaging chemical reactions that are triggered by sharply dropping oxygen levels.
The thing is, those reactions require the presence of some oxygen. Hydrogen sulfide takes the place of oxygen, preventing those reactions from taking place. No chain reaction, no cell death. The patient lives.

Okay, so this is more like a form of suspended animation than an on/off switch. As the article notes, metabolic reactions continue, just at an extremely slowed rate. But it’s quite similar in effect; in rats, at least, it appears that immersing them in this gas is like turning them off without killing them, and putting them back in regular air seems to revive them as if nothing had happened.
If it can be safely used by humans, this apparent state of suspended animation would be very different from the related techniques that are now available. Barbiturate-induced comas, increasingly used in medicine during the last two decades, only shut down the brain, not the whole body — and their safety is debatable. And cryonic freezing is not currently reversible.
The potential therapeutic and not-so-therapeutic applications of this new technique — again, assuming that it works on and is relatively safe for humans — boggle the mind. The CNN article sticks strictly to the therapeutic applications. It would allow for new ease in surgeries, like open-heart operations, that temporarily disrupt metabolic processes. You can also imagine the potential in emergency situations, to shut someone down until he can be rushed to the best facilities. Or you could put someone into suspended animation while she awaits a donor organ.
The notion of a human on/off switch really reminds me — to put my nerd cards fully on the table here — of an episode of Star Trek: The Next Generation, “The Measure of a Man.” In that episode, Data, an android, is put on trial to determine whether he is a sentient being with rights (a person), or property of the Federation (a machine). In order to demonstrate that he is not a person, Commander Riker first removes Data’s arm and then, as a closing argument, abruptly walks up behind him and flips a switch on his back that shuts him off. Data falls forward onto the table, rendered a mere hunk of metal (or “bricked,” to use the parlance of our times), and Riker proclaims, “Pinocchio is broken; its strings have been cut.”
Aside from the obvious ethical problems of the human on/off switch, I wonder on what grounds we can maintain our sense of personhood when we come to understand ourselves as mechanisms rather than living beings?

3 thoughts on “A human on/off switch”