Two thoughts about children and culture, prompted by a re-reading — or rather, if I’m honest, my first really thorough reading — of Iona and Peter Opie’s classic The Lore and Language of Schoolchildren (hereafter LLS): 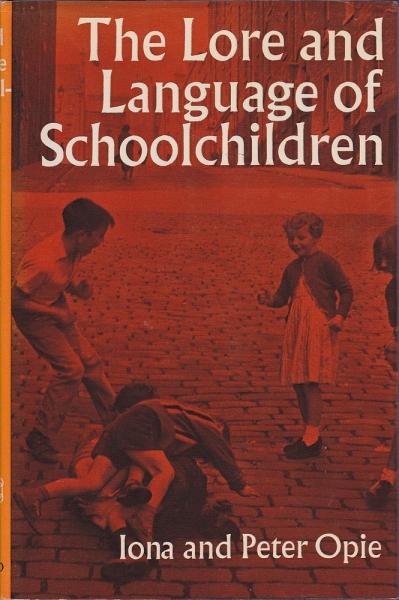 1) A few days ago I experienced a wonderfully bizarre moment of readerly serendipity: I was reading Pynchon’s Gravity’s Rainbow, in which a character hears, from a distance, children singing “Hark the herald angels sing, / Mrs Simpson’s pinched our king” — and then a couple of hours later I picked up LLS (p. 6), where that very verse is cited as an example of “the efficiency of oral transmission” “by the schoolchild grapevine,” a channel of communication whose speed “seems to be little short of miraculous.” The Opies point out that word of King Edward’s dilemma — to keep the throne and reject Mrs Simpson or marry Mrs Simpson and abdicate the throne — only began to reach the public in the last week of November; and Edward formally abdicated on 10 December. Yet when the carol “Hark the Herald Angels Sing” was played at an end-of-term festivity in Swansea, “a mistress found herself having to restrain her small children from singing this lyric, known to all of them, which cannot have been composed much more than three weeks previously.” You don’t need the internet to have the rapid spread of memes.

But when you do have the internet, what becomes of “the lore and language of schoolchildren”? One answer will be that they’ll be just as creative and imaginative and intellectually acquisitive as ever, and will simply use internet-connected devices as their instruments for deployment and dispersal. But I suspect that that’s too glib an answer — as would be its opposite, the one that says that in the age of the internet children’s creativity is dead. But it’s hard for me to see how, in a universally connected age, children can continue to make their own culture wholly apart from the prying eyes and alert ears of adults, many of whom want to find ways to monetize children’s attention. I hope some smart people are studying these matters with care.

2) In chapter 10 of LLS, “Jeers and Torments: Unpopular Children,” the Opies write of hair-pulling and ear-pulling games, citing sources from Blackburn, Swansea, Newcastle, East Texas, and African-American culture as a whole, the last via T. W. Talley’s 1922 book Negro Folk Rhymes. They then comment, “it seems certain that somewhere, sometime, this game played in the nineteenth century by coloured folk in the United States, and the ordeal which little girls undergo in Britain today, must have had a common ancestor.” They suspect a Scottish origin, but of course can only speculate.

And this ought to remind us how completely misbegotten it is to rail against “cultural appropriation”: culture is appropriation. Culture is hearing and borrowing and transforming. Culture is giving and taking and giving again. You can’t legislate against it, and it would be foolish (indeed, a truly tragic error) to try.

Not long ago I saw someone on Twitter declaring that white people shouldn’t clap their hands between words — IRL or via emoji on Twitter — because that’s unjust appropriation of black culture. But, I thought immediately, my grandmother did that — a white woman born in 1906. Was she appropriating? Where did she get that gesture? It’s perfectly possible that she did get it from black people, since, despite the vicious cruelty of the Jim Crow era, many white people in the Deep South, especially poor-ish white people like my grandparents, spent a good deal of time around black people. But maybe the influence went in the other direction. Probably, like the rhymes and taunts shared by people in Newcastle-upon-Tyne and people in East Texas and black people throughout the South, it’s a gesture that has some ancestor we’ll never know. Such uncertainty makes claiming ownership over gestures or styles or memes impossible, even if it were desirable. But it’s not desirable; it’s anything but.

2 thoughts on “children and culture”