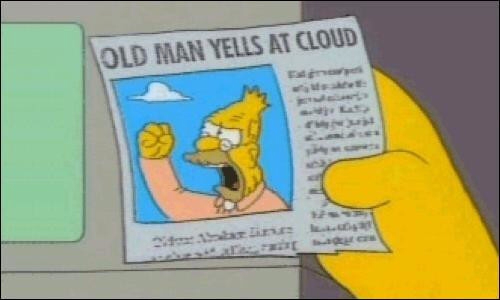 Most of what I have to say about Jonathan Franzen’s ridiculous essay in the Guardian is communicated by the image above, and by this Hilary Kelly piece on his utter deafness to irony, but I want to add one small note.

Like many people who complain about the limitations of Twitter, Franzen seems unaware that you can write more than one tweet. If you don’t get everything said in your first tweet, then you can write another one — and another after that! It’s endless, actually! Rather like writing a novel, which, as I understand it, you do one sentence at a time.

For Franzen, though, frequency of publication seems to be all-important. If you reflect on your experience in tweets it’s “yakking about yourself,” but if you save up all those thoughts until you have a two-hundred-page memoir it’s literature.

Which makes it very odd, then, that Franzen should choose Karl Kraus as his exemplar of excellence, for Kraus was a journalist whose particular writerly excellence lay in the creation of — yes — aphorisms. He produced many hundreds of these, the best of which have been collected in this book. They are not all tweet-sized, but a great many of them are — enough that I’m tempted to create a Karl Kraus Twitter account.

Kraus’s aphoristic power was particularly striking to W. H. Auden, who, with Louis Kronenberger, produced an anthology of aphorisms in which Kraus features prominently and, following Kraus’s example, became a devoted practitioner of the aphoristic art himself.

So it turns out that there’s yet another way in which Franzen is deaf to irony. The man he sets heroically against the world of tweeters might very well have been the best tweeter of them all.