on The Bone Clocks 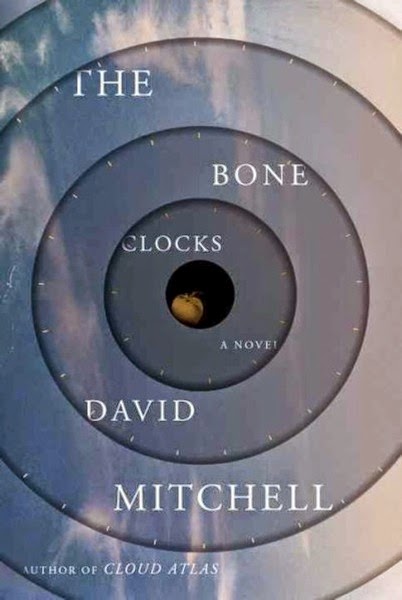 I can’t write something orderly and coherent about David Mitchell’s The Bone Clocks, which I finished yesterday, but I want to record some responses. There are no major plot spoilers in what follows, but maybe some mood or tone or context spoilers. I’m trying to be relatively discreet, but caveat lector and all that..

1) If you don’t know much (or anything) about David Mitchell, this passage from James Wood’s review of The Bone Clocks will help:

David Mitchell is a superb storyteller. He has an extraordinary facility with narrative: he can get a narrative rolling along faster than most writers, so that it is filled with its own mobile life. You feel that he can do anything he wants, in a variety of modes, and still convince. “Black Swan Green” (2006) is a funny and sweet-natured semi-autobiographical novel, conventionally told, about a boy growing up in a stifling Worcestershire village. “Cloud Atlas” (2004), his best-known book, is a brilliant postmodern suite, comprising six connected and overlapping novellas, set in such eras as the eighteen-fifties, the nineteen-thirties, the nineteen-seventies, and the dystopian future. His 2010 book, “The Thousand Autumns of Jacob de Zoet,” is a more or less traditional historical novel, set in 1799, in the bay of Nagasaki, about relations between the Japanese and the Dutch. He has a marvellous sense of the real and of the unreal, and his best work keeps these elements in nice tension—a balancing of different vitalities. One of the reasons he is such a popular and critically lauded writer is that he combines both the giddy, freewheeling ceaselessness of the pure storyteller with the grounded realism of the humanist. There’s something for everyone, traditionalist or postmodernist, realist or fantasist; Mitchell is a steady entertainer. Pleasing his readership, he has said, is important to him: “One of the questions I always try to keep in the front of my mind is to ask why would anyone want to read this, and to try to find a positive answer for that. People’s time, if you bought it off them, is expensive. Someone’s going to give you eight or ten hours of their life. I want to give them something back, and I want it to be an enjoyable experience.”

But beyond that, Wood’s review is just useless. Mitchell’s books all work the boundaries between what people call “literary” fiction and what they call “genre” fiction, and Wood simply lacks the ability to respond to fantasy; and The Bone Clocks has stronger elements of the fantastic than any of Mitchell’s previous books.

2) So when Wood writes of our encounters in the novels with immortal beings, and others who strive for immortality, “these happenings, which occur over hundreds of pages, feel a bit empty, because they are not humanly significant.” Well, they don’t seem empty to me, and I would say that they are indeed “humanly significant,” because one of Mitchell’s chief goals in this book is to explore how this world we live in and the people who occupy it just feel different to those who live only once, so briefly, than they do to those who live hundreds of lives. Though it would be hard to imagine a book less Tolkienian in tone and structure than The Bone Clocks, this contrast between mortals who have received the “gift of death” and those who must bear the burden of long centuries brings to mind Tolkien’s treatment of Men and Elves — both “children of Iluvatar” (God) and yet doomed to experience the same world in radically different ways.

3) It seems to me that Mitchell especially wants us to think about the relationship between death and love. The immortals — who have formed a society called Horology — are not without love. But their loves necessarily have a texture that is largely alien to ours. Holly Sykes, who is effectively the protagonist of this story, asks one of them a question that, in the context of Holly’s own experience, is telling:

“Do you have families?”

“We’re often resurrected into families…. We form attachments, like Unalaq and Inez. Until the twentieth century, traveling alone as an unmarried woman was problematic.”

“So you’ve been married yourself?”

“Fifteen times, though not since the 1870s. More than Liz Taylor and Henry the Eighth combined. You’re curious to know if we can conceive children, however.” I make a gesture to brush her awkwardness away. “No. We cannot.”

And this seems to the Horologist a good thing. It would be exceptionally painful “to live, knowing your kids died of old age decades ago. Or that they didn’t die, but won’t see this loon on the doorstep who insists he’s Mom or Dad, reincarnated. Or discover you’ve impregnated your great-great-grandchild.“ However: ”Sometimes we adopt, and often it works well. There’s never a shortage of children needing homes. So I’ve never borne or fathered a child, but what you feel for Aoife, that unhesitating willingness to rush into a burning building, I’ve felt that too. I’ve gone into burning buildings, as well.”

In some ways going into burning buildings is what Horologists do — and yet it’s clear that whatever love the Horologists feel for mortals is simply not the same as the love we mortals have for one another, especially our families, whether those families are biological or adoptive. Death may not be the mother of familial love — as Stevens said it is the mother of beauty — but it is deeply intertwined with our connections to those who came before us and those to whom we pass the torch. Many episodes in the book, including the last one, confirm this point.

4) The Anchorites, those who would achieve immortality, or at least very long life, by stealing the lives of others — the Horologists call it “animacide” — recall J. K. Rowling’s Death Eaters. They fear death and will do anything to avoid it. (It is to them that mortal human beings are merely “bone clocks.”) By contrast, the Horologists — well, some of them, anyway — die repeatedly and are sent back to this world whether they want to be or not. But they have no idea who sends them, or why. They have seen something of what lies on the other side of death, but don’t understand it any more than we do. Two remarkable scenes in the novel explore this. Here’s a passage from one of them:

“I’m still a newbie,” says Arkady, “on my fifth self. Dying still really freaks me out, in the Dusk, looking over the Dunes …”

“The Dusk,” Arkady says, “between life and death. We see it from the High Ridge. It’s a beautiful, fearsome sight. All the souls, the pale lights, crossing over, blown by the Seaward Wind to the Last Sea. Which, of course, isn’t really a sea at all, but—”

Arkady drinks from his coffee bowl, then wipes his lips. “Yes, Ms. Sykes, to both your questions. But the Landward Wind blows our souls back, like it or not. Back over the High Ridge, back into the Light of Day, and then we hear a noise like … a town being dropped, and everything in it smashing to bits.”

And so they return. Later on, Holly briefly glimpses the Dusk herself. One of the Horologists narrates:

I walk over to the oblique-angled west corner, where a window offers a view over one mile or a hundred miles of Dunes, up to the High Ridge and the Light of Day. Holly follows me. “See up there?” I tell her. “That’s where we’re from.”

“Then all those little pale lights,” whispers Holly, “crossing the sand, they’re souls?”

“Yes. Thousands and thousands , at any given time.” We walk over to the eastern window, where an inexact distance of Dunes rolls down through darkening twilight to the Last Sea. “And that’s where they’re bound.” We watch the little lights enter the starless extremity and go out, one by one by one.

Holly asks, “Is the Last Sea really a sea?”

“What happens to the souls when they get there?”

I don’t know what James Wood has done to his readerly self to see encounters like this as “not humanly significant,” but I pray it never happens to me.

5) All this said, The Bone Clocks is a deeply flawed book. Its primary shortcomings stem from simple self-indulgence. We are treated to extended passages of travelogue, in which globe-hopping writers attend conferences in Shanghai and western Australia and Iceland — as though (I suspect) globe-hopping writer David Mitchell had amassed thousands of words in his travel diary that he didn’t know what to do with. Mitchell is a master of pastiche — there seems to be no literary style that he can’t imitate — but we really don’t need dozens of pages of faux war-correspondent-memoir. And the book is marred above all by a long coda that introduces what amounts to a whole new fictional world for the apparent purpose of making some sober and serious socio-political statements. Perhaps those statements need to be made, but if so, they deserve their own book, and shouldn’t be allowed to disrupt so thoroughly the development of this one. I don’t wish that the book were shorter; but I do very much wish that it had been equally long in a somewhat different way. There is occasional tedium here for the reader, or for this reader anyway — a shocking thing to experience in a David Mitchell book.

6) Still, The Bone Clocks is a massive achievement, and allows us for the first time to see just how ambitious a writer David Mitchell is. He is not stylistically ambitious as, say, James Joyce was — as I’ve noted, Mitchell shares Joyce’s love of pastiche, but it’s fairly pedestrian vocabularies that he likes to imitate. His books don’t quite amount to novels of ideas, at least not in a conventional sense. In fact, it’s hard to describe Mitchell’s ambition. But while it has long been noted that Mitchell tends to recycle characters — people who appear as minor figures in one novel reappear as major ones in another — only with The Bone Clocks are we able to see that this is not just a little novelistic quirk but rather a central feature of Mitchell’s imagination. All of his books are starting to look like a single vast web of story, with each significant character a node that links to other nodes, across space and time. And the essential insight, or image, or hope that provides structure to the whole web is the immortality of the human soul.

What does Mitchell himself really think about this web he is weaving? He himself is not sure. When asked recently what he thinks about souls, he replied, “I doubt that we have them, and I hope that I’m wrong.”

2 thoughts on “on The Bone Clocks”