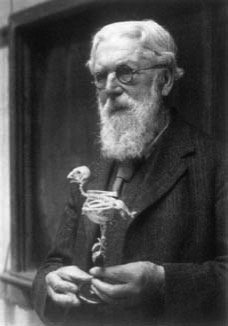 In my previous post I explored some of the biological contexts of the idea of morphosis, form-changing, in Pynchon’s work. But I also hinted at the moral, the theological, and the literary-imaginative uses of the immensely rich concept of form.  In light of all this it’s worth noting that by general consent the most remarkable endeavor in the history of biological morphology is D’Arcy Wentworth Thompson’s massive and magisterial On Growth and Form — over 1100 pages in its second edition of 1942.

Pretty much everything about Thompson is fascinating, but I’d like to call particular attention to the fact that he was a classicist as well as a biologist and mathematician. Legend has it that at the University of St. Andrews he was offered his choice of professorships in classics, mathematics, or zoology (though his very versatility, and the unpredictable views it spawned, meant that he was never hired at Oxford or Cambridge, though he applied several times for jobs at those universities).

He became a hero and model to, among other scholars, Stephen Jay Gould, who in 1971 published a wonderful essay about Thompson — and published it in New Literary History, later to become the leading journal of literary theory. In that essay, a revised version of Gould’s senior undergraduate thesis at Antioch College, Gould comments that

D’Arcy Thompson’s mathematics has a curious ring. We find none of the differential equations and mathematical statistics that adorn modern work in ecology or population genetics; we read, instead, of the partitioning of space, the tetrakaidekahedron, the Miraldi angle, the logarithmic spiral and the golden ratio. Numbers rarely enter equations; rather, they exemplify geometry. For D’Arcy Thompson was a Greek mathematician with 20th century material and insights. Growth and Form is the synthesis of his two lives: eminent classicist and eminent zoologist. As he stated in a Presidential Address to the Classical Association (1929): “Science and the Classics is my theme today; it could hardly be otherwise. For all I know, and do, and well nigh all I love and care for (outside of home and friends) lies within one or the other; and the fact that I have loved them both has colored all my life, and enlarged my curiosity and multiplied my inlets to happiness.”

(“Multiplied my inlets to happiness” — what a delightful phrase.) The geometrical character of Thompson’s biological mathematics keeps him close to the sensually accessible character of actual creatures: he uses geometry to describe things we can actually see. And this positions his work within the same ambit as literature and ordinary language, something he was quite aware of. Gould’s essay takes as its epigraph at important sentence from the latter pages of On Growth and Form: “Our own study of organic form, which we call by Goethe’s name of Morphology, is but a portion of that wider Science of Form which deals with the forms assumed by matter under all aspects and conditions, and, in a still wider sense, with forms which are theoretically imaginable” (emphasis mine).

This notion of a “wider Science of Form” was immensely attractive to Gould. In The Structure of Evolutionary Theory, his attempt, published just weeks before his death in 2002, to write his own magnum opus along the lines of On Growth and Form, Gould makes an interesting comment on the sources of his mature thinking about evolution:

I read the great European structuralist literatures in writing my book on Ontogeny and Phylogeny. I don’t see how anyone could read, from Goethe and Geoffroy down through Severtzov, Remane and Riedl, without developing some appreciation for the plausibility, or at least for the sheer intellectual power, of morphological explanations outside the domain of Darwinian functionalism — although my resulting book, for the last time in my career, stuck closely to selectionist orthodoxy, while describing these alternatives in an accurate and sympathetic manner.

That “selectionist orthodoxy,” which he would later call “Darwinian fundamentalism,” became for him the chief enemy of a truly universal science of form, the kind of thing that Thompson had imagined, an account that could potentially be equally useful in illuminating the structure of crystals, the petal arrangements of roses, the  shape of a novel’s plot.

I don’t yet know, but I have a suspicion that meditation on these themes will be useful to me as I try to come to grips with Thomas Pynchon’s body of work. And I have this sinking feeling that at some point I’m going to have to reckon with Goethe’s role in this history….

4 thoughts on “growth and form”