mother (and other) tongues 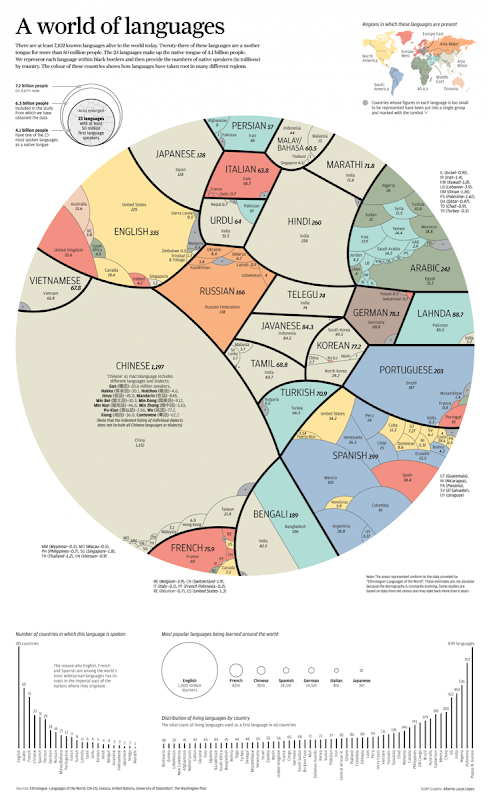 This map of languages around the world is messed up in several ways, some of them easily avoidable, some not so much. But the most notable oddities — the complete neglect of African languages, the absence of the Indian subcontinent from the English bubble — are a product of that curious concept “first language.” If you live in Nairobi your first language, in some sense, might be Gĩkũyũ, but you may also speak English or Swahili far, far more often — and maybe more fluently as well. Similarly, for many millions of people in India and Pakistan it just doesn’t make practical sense to think of English as their second or third language. It’s as “first” as Hindi or Urdu.

The great polymathic scholar George Steiner, in his masterwork After Babel, has written of how deeply people believe in the idea of a first language, a “mother tongue,” and how resistant they can be to the idea that one can be truly multilingual — multilingual all the way down. I’ll leave you with a fascinating passage on this:

I have no recollection whatever of a first language. So far as I am aware, I possess equal currency in English, French, and German. What I can speak, write, or read of other languages has come later and retains a ‘feel’ of conscious acquisition. But I experience my first three tongues as perfectly equivalent centres of myself. I speak and I write them with indistinguishable ease. Tests made of my ability to perform rapid routine calculations in them have shown no significant variations of speed or accuracy. I dream with equal verbal density and linguistic-symbolic provocation in all three. The only difference is that the idiom of the dream follows, more often than not, on the language I have been using during the day (but I have repeatedly had intense French- or English-language dreams while being in a German-speaking milieu, as well as the reverse). Attempts to locate a ‘first language’ under hypnosis have failed. The banal outcome was that I responded in the language of the hypnotist. In the course of a road accident, while my car was being hurled across oncoming traffic, I apparently shouted a phrase or sentence of some length. My wife does not remember in what language. But even such a shock-test of linguistic primacy may prove nothing. The hypothesis that extreme stress will trigger one’s fundamental or bedrock speech assumes, in the multilingual case, that such a speech exists. The cry might have come, quite simply, in the language I happened to have used the instant before, or in English because that is the language I share with my wife.

One thought on “mother (and other) tongues”